A downloadable game for Windows

Play as the cute little witch Nobeta and explore the magical adventure in the ruins!

Download and unzipped to executes the game, no installation required.

i liked this one 5/5, i put it on my wishlist on steam too, some footage below

Iron pineapple reviewed your game and he approved it, good job!

The game is coming out next month... on Steam... early access -_-
Guess I'll have to be content with that DEMO from now on cause if he's going early access, it's staying on Steam. Well sorry mate, I no longer buy indie games with DRM.

can this be on Mac?

Please consider releasing the full game on Itchio! I look forward to supporting the game at launch!

I hate it when developers use Itch just to advertise their game, but then only release on Steam because God knows DRM reeeally make a difference against piracy (sarcasm). If you don't like Itch, at least try getting on GOG.com.

nvm it works well on steam

Fantastic
I can't wait to see what you do next!

I would like to first congratulate you on a very great game. I played the DEMO twice last night and I had a lot of fun with it.

First, for my question, do you plan to release the game on Itch.io when it's complete or only on Steam? I'm asking before I do prefer buying on DRM-Free platforms like Itch.io, GOG.com or Playism.

That's pretty much it really, I couldn't find anymore additions for such a great game. Looking forward to the full release.

very fun game enjoyed it a lot and cant wait to get to play more. i did container some problems though, no matter what i used controller or mouse and keyboard there was a bad drift that i never had on any other games it was not bad just made shooting a lot harder. that is  the only bug i found. the other problem more of my opinion of the character clumsiness and how i think its is cute it kinda interferes with the combat because when she falls it takes a good amount of time to get back up and the monsters can still hit you while your down. i am not saying you should take it out just maybe only making her clumsy when she is out of combat. the other problem i had it with the boss, when he dose the spine move it pretty difficult to doge and it felt like i could only doge it at some times even when i figured out the pattern. this may be just because  i am bad at the game lol and nothing at all. other then these few things i loved the game it was amazing and cant wait to play more!!!

Hello @pupuya, any updates on your current progress? uwu

The clothes in the video are different from mine.  Mine didn't have the hat and witch outfit.

what do you mean? maybe there's a newer demo

This is what my character's clothes looked like: https://imgur.com/a/B1EJTo0

I got the demo from steam though, so maybe the one here is different or something.  It's nothing big, I was just curious as to why my clothes were different.

well now this makes me wonder, is there more to do in that demo? o.O?

Haha!  If you didn't know, after you play through and beat the boss, if you load up the same save file, it lets you use the other types of magic.

After the "Made with Unity" logo, the game doesn't start?

Does anyone else have this problem?

Amazing demo. The normal enemies are not very engaging to fight until the second run, but the boss at the end is incredible, really fun and well designed fight.

The controls are a delight, love the double jump and air dodge, air shooting and the parry move. Only thing I have to complain is that the toggling running controls on the keyboard are not always so smooth, sometimes the character won't start sprinting (even with full stamina).

Lovely game, wish there was some more platforming and maybe flying enemies to fully enjoy the jumping controls, but I might have to wait for when it comes out.

I'd support this if I could.

Astounding game. Thoroughly enjoyed it. Definitely buying it on steam.

This was so much fun to play. Saved the best game for last in my indie romp. I hope you enjoy the video :) do you have any plans to continue the game?

This game is awsome!
But i would like to give a heads up, just in case the devs want to fix it, its nothing major, just mildly anoying: when i put the game on fullscreen using Alt+Enter, the game exits fullscreen everytime a cutscene ends or the screen transitions.

Thanks for your feedback!

I will fix it!

An amazing game, as a souls fan i can say that this game has everything to be a succes, on normal difficult the level was pretty easy but the boss was just fine i cleared the demo in about 30 min,i cant wait to play the full version!

Edit: the level design and music is far better that i was especting from an indie game, excellent work

I LOVED this game. The aesthetic is so good and it controls really well too! There are some a few English problems in the text but they'd be easy fixes. I hope there are more interesting/a variety of environments and enemies in the final version. I'm also looking forward to uncovering the story. Thanks so much for making the demo available, I played it on my YouTube channel.

The first thing I noticed about the game straight away were the graphics. They look absolutely wonderful!

Although I've always found story more important over the way a game looks, I was impressed by them. Especially for it being an indie game!

Speaking about the story, I like it so far. It is rather cute but also has enough action blend in with it. Don't want to spoil anything, however.

Gameplay itself runs and feels real smooth. Never had any issues or bugs. I like how the game gives you different types of spells. Could be an interesting concept to work with. Perhaps make different skill trees, one fire, one ice, one lightning etc. Fire for instance could be the burst fire it is now, a fire ball, a flamethrower ...

The second thing about the spells is that I think maybe you could change the setup. Right now you have to choose while holding the Tab button, whilst the items you found are in a slot bar. I think maybe changing these would be easier, allowing the player to switch between their spells faster by hitting the numbers on their keyboard and have the inventory open with the Tab button.

Now, my only point of criticism, although I wouldn't really call it that, is the English translation. There were some big and small mistakes here and there. But, seeing as your main language isn't English and the game is still in early development, I don't consider this to be a big issue right now.

Finally, I read in some comments that the game is unbalanced and too hard.. I disagree. The boss for instance was not too hard. It took me a while to find out what spell he was weak too, and once I did, he was really easy. Maybe a little notification at the start of the game 'certain enemies are weak against different spells' would help this issue.

That all being said, I'm looking forward to what this game has to offer. I'll definitely give it another go once completed!

I also made a little video on my experience of the game, feel free to have a look or to use footage to promote the game!

Many thanks for the suggestions and feedback.

Regarding the choice of spells, you can change the button settings in the Option to switch spells more quickly. The preset buttons are F1, F2, and so on.

The video is very interesting!

I agree with Mister Bopi!  The demo is great!

I so also agree with his feedback about the English translating being a little rough.  Overall though, it's fine!  It still got the point across, which is good enough for me!

The rest of the demo was perfect though!

Like I said on Steam, you need to balance this game A LOT. The boss fight is nearly impossible, you don't deal enough damage, the boss deals way too much, your magic chargesup too slowly, most of his attacks you can't dodge, and when you get hit, and he spams more attacks on you as you can't move? none of that is good.

I started off loving this, and now I hate it with a passion.

#1 on your list is to fix the balancing issues, the game is sad to play like this.

The game's balance needs adjustment indeed.But I still want to say that you play this game like Caixukun.

i don't get the reference.

Thanks for your feedback!

I will try to adjust!

good game with a great graphic and gameplay, the animation is really smooth and the main character is super cute!!! OwO . i hope the game will have a great story too in the future release, it would be awesome!!.

can't wait for the full version :)

Absolutely adorable, can I take her home? = 3=

Hey, Here's my coverage it's a nice game

I feel like you should focus on changing many thing before the release, especially the boss room was way too glitchy. If you are planning on releasing review keys let me know there's the best place to ask for one ;)
Reply
pupuya351 days ago

I will try to adjust again!

Looks lovely and the gameplay mechanics are solid. I wasn't expecting the boss to be so challenging, and it was a pleasant surprise. That said, the MP meter could be a tad more forgiving; especially if getting hit will disable the powered up staff, throwing a pretty important MP investment out the window.

I'm absolutely in love with the animations, there are a handful of details that truly sell the game.

All in all, I'm fully hooked and expecting eagerly the full release.

Really fun! All the mechanics are very smooth and work well. I can't wait to see the finished product!

There's a few minor issues with the English translation but it's still understandable.

Would you consider more difficulty options for future release? Normal Mode feels too difficult but Easy Mode takes the fun out of it with infinite SP.

The difficulty of the game will be adjusted in the future!

Is it in english? 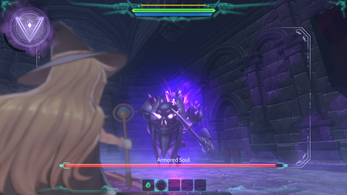 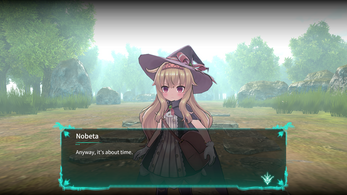 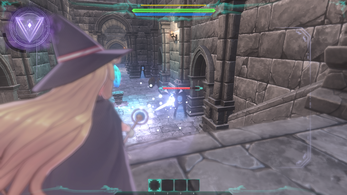 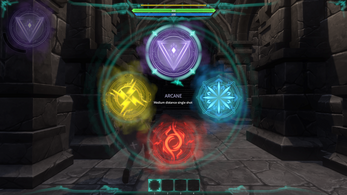 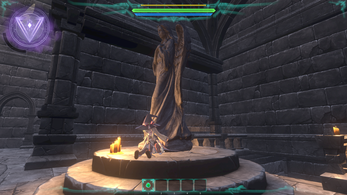